Here is it – the Supreme Court draft opinion that would reverse Roe v. Wade – and it is chilling.

“We hold that Roe and Casey must be overruled. The Constitution makes no reference to abortion, and no such right is implicitly protected by any constitutional provision, including ... the Due Process Clause of the Fourteenth Amendment. That provision has been held to guarantee some rights that are not mentioned on the Constitution, but any such right must be ‘deeply rooted in this Nation’s history and tradition’ and ‘implicit in the concept of ordered liberty.’”

“The enumeration in the Constitution, of certain rights, shall not be construed to deny or disparage others retained by the people.” In other words, the Founders were aware that they did not list ALL our rights, and they made it clear that anything not specifically “given” should not be “taken.”

In 2020 when Amy Coney Barrett was confirmed on the Supreme Court, I wrote a blog entitled “Amy Coney Barrett: Enemy of Women.” Barrett’s family is part of a crazy Christian church called the People of Praise, and Barrett was one of the Handmaids (a leader in the female order of this church), as reported by the Washington Post.

Thus, Barrett became the first fundamentalist Christian on the Supreme Court and her antiquated beliefs – along with the misogyny of the conservative male justices – have just STOLEN the rights of 170,000,000 women in the United States. Not to mention the roughly 40,000,000 girls between the ages of 10 and 17 who could become pregnant against their will.

As Michael Moore aptly points out: “Once pregnant, the government will now make all women prisoners of their wombs, automatically forced for the full nine months to carry the fetus inside them to term, whether they intended to be pregnant or not, a 21st century version of house arrest. ... This Order by the Supreme Rulers gleefully violates the very first pronouncement of our Constitution’s First Amendment which clearly states, without equivocation, that “Congress shall make no law respecting an establishment of religion.”

The reversal of Roe v. Wade would force all Americans to follow the misogynist beliefs of Evangelical Christians and the Catholic Church – a church I consciously chose to leave in first grade when I learned I could not be an altar attendant like the boys. Now, the Supreme Court makes it plain that women are not equal citizens to men, as did my birth religion. How dare they force me to follow THEIR RELIGIOUS BELIEFS! 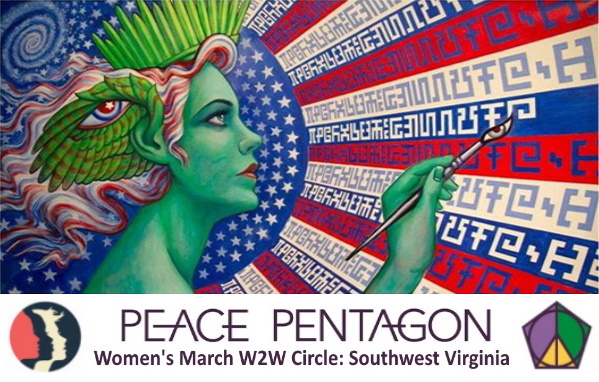 From the Peace Pentagon in Independence, Virginia, I proclaim:

Women will NOT have issues of bodily sovereignty dictated by the five religious zealots who sit on the Supreme Court.

Never before have I wanted to scream the far-right’s mantra – DON’T TREAD ON ME – but now I and millions of women across our great land will shout that ... and more.

In the words of Julia Ward Howe in her “Mother’s Day Proclamation,” I now shout:

Arise, all women who have hearts whether your baptism be that of water or of tears! Say firmly: “We will not have great questions decided by irrelevant agencies, our husbands shall not come to us, reeking with carnage, for caresses and applause. ...

In the name of womanhood and of humanity, I earnestly ask that a general congress of women without limit of nationality may be appointed and held at some place deemed most convenient and at the earliest period consistent with its objects, to promote the alliance of the different nationalities, the amicable settlement of international questions, the great and general interests of peace.

May that place be the Peace Pentagon. Ladies, join us this fall for a special strategy session and planning retreat on how to preserve and protect our innate rights! Stay tuned for details ...